Given the popularity of the previous Defender 2 post, we went on to play more and more until most skills were maxed and different strategies needed to be developed. Without further to do, here are our thoughts about playing Defender II at stage 700+.

There have been some updates from the initial version we started reviewing a while back. One that is notable is the lifted limit for Mana Research. Although previously we advised players not to use the top spells for fire ice and lightning at the same time, this is no longer the case.

Apart from the skill updates, Droidhen now also displays full screen advertisements for their other games (yeah, even if you make an in app purchase to remove the traditional ads). They even have an add for the original Defender game.

The following are all the skills for our player, but without any bonuses from the Final Fantasy bow.

As you might have guessed, the prices for coins in the Defender Shop is the same, regardless of your level. Which, for high level players is a problem. Why should you pay $1.99 for 8000 coins, when you get more than that for completing a single stage? 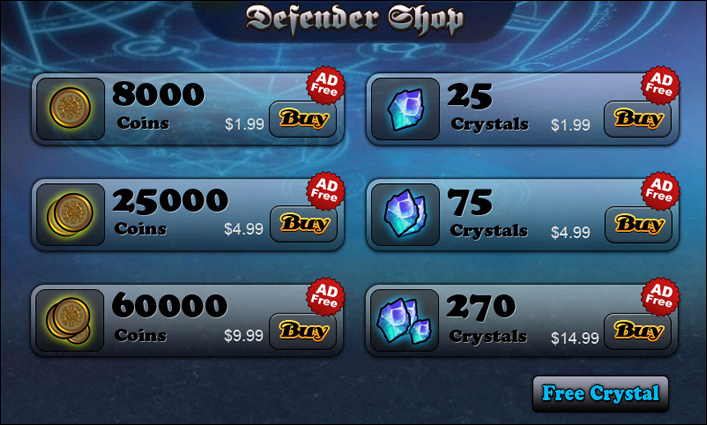 As the number of monster increases and your life points are limited to 300, you quickly need to defend yourself from the incoming waves. The difficult part is when the waves start to intersect. Yes, nobody is waiting on you to clear out a wave. And things start getting really interesting when you get some catapults that take the hits and protect those green monsters behind them. Or you sometimes have to deal with spiked monsters and green ones at the same time. Unfortunately, spells will protect you only for a short amount of time in these circumstances. You need to invest coins in Strength and Multiple Arrows if you want to keep up with the monsters.